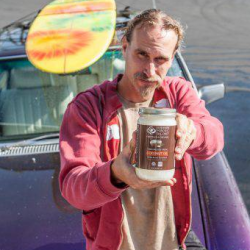 David Bronner, President of Dr. Bronner’s Magic Soap, is an organic industry pioneer and outspoken genetically engineered food labeling activist. David and his brother Michael established Dr. Bronner’s as a trendsetter in the organic body care industry by becoming one of the first brands to certify its soaps, lotions and balms under the USDA National Organic Program in 2003 — marking the beginning of Dr. Bronner’s Magic Soaps’ issue-oriented activism in the natural products marketplace.
We had the pleasure of interviewing him about the incredible work he’s done on the GE labeling front, check it out.

Q: What made you first become passionate about the issue of genetically engineered food, and advocating for mandatory labeling?

A: At Dr. Bronner’s we are passionate about organic agriculture, and are one of very few personal care companies whose entire product range is certified under USDA’s National Organic Program standards, the same program that certifies food. Organic versus conventional agriculture is about building soil health and tilth naturally and sustainably, without the petrochemical pesticides and fertilizers that destroy our soil and pollute our food, water and bodies.
While genetic engineering could be a beneficial technology in principle, as applied to agriculture it’s been a disaster. Far from freeing us from the chemical treadmill of conventional industrial agriculture, it’s now on steroids. Only two genetically engineered traits are in widespread commercial use: herbicide resistance, so that huge amounts of herbicide can be sprayed on food crops, and crops that produce their own insecticide. Both have the entirely foreseeable effect of exerting massive selection pressure on weeds and pests to develop resistance, much like overdosing factory farmed densely confined animals with antibiotics is causing resistance in virulent strains of bacteria. Pesticide use has predictably skyrocketed as weeds and pests gain resistance, which is great for the giant chemical companies that engineer the seeds to resist their chemicals and sell the chemicals, but not for anybody else.
Labeling GMOs would give consumers that right to choose if they want to buy a genetically engineered food or not. It is a no-brainer: we need complete transparency in order for consumers to be able to make an informed choice about the products they are buying and the kind of agriculture they want to support.

Q: From a business perspective how hard would it be for companies to label the presence of GE ingredients in their products?

A: It would not be hard at all. Companies change their labels all the time (including Dr. Bronner’s) and not once has that meant we raised prices to our customers. It’s so dumb. Further, U.S. food companies already label in 64 countries that require GMOs to be disclosed, including all of the European Union and Japan, and food costs have not gone up in those countries.

Q: Do you think there are any potential benefits to biotechnology?

A: Definitely I appreciate the fact that we can produce medicines like insulin via genetically engineered microorganisms, versus grinding up cow pancreases. And theoretically in agriculture, drought tolerance or nitrogen fixing would be great. Unfortunately these are complex genetic traits and they have so far been commercial failures. People need to focus on the facts on the ground versus make-believe: over 99% of GMO crop acreage is engineered to resist and/or produce pesticides. And the resulting widespread weed and pest resistance means that even more pesticides are being blasted on our food and farmlands.

Q: As a company, what has Dr. Bronner’s done to support GE labeling?

A: We financially support diverse NGOs (including Just Label It) dedicated to organic sustainable agriculture, who are opposed to the disaster of genetic engineering in agriculture. We were an early major supporter of California’s Prop 37, a GMO labeling initiative that was voted on in 2012. Despite being outspent $45 to $9 million by the opposition, we almost won that election, 49-51.
In 2013 we were heavily involved in Washington State’s 522 Initiative for GMO labeling. We were the largest contributor to the campaign, giving almost 2 million dollars to try to get it passed. We also experimented with having a special label on our soaps for the first time, to inform consumers about the issue. We were still vastly outspent by the opposition, and again, narrowly defeated, 49-51. The movement, on the one hand, made a mistake trying to pass a measure in an odd-year electorate which is much smaller, older and more conservative. On the other, we kept the pressure on in the larger culture and fight, that helped pave the way to the major 2014 victories in Vermont and Jackson County, Oregon.
We also were major donors to the Vermont effort, giving over $300K over the past three years, as well as $40K to Jackson county’s fight. We support various state and national efforts, but this year we are very excited that the Oregon Right to Know GMO effort is going to ride the momentum off Vermont and Jackson county, and break open the dam for states everywhere to enact labeling. Things are lined up there with a very favorable and informed electorate, and a terrific and experienced campaign team. And we are once again going to do a special GMO info label on our soaps.

Q: Do you personally try to avoid eating GE foods? How?

A: I eat organic foods as much as possible. By definition, organic food cannot contain any genetically engineered ingredients. To be clear, simply because something is not GE, doesn’t mean it isn’t coated in pesticides and grown in a completely unsustainable manner. Only organic delivers the full sustainable deal.

Q: Who do you admire for their leadership on GE labeling?

A: Ronnie Cummins of the Organic Consumers Association takes names and kicks ass like no other; Andy Kimbrell founder of Center for Food Safety has been a crucial leader and strategist for the movement. Rather than try to list all the rock stars and miss anyone I’ll just say there’s a lot more on the spectrum rocking hard across the board in this movement.

Q: What other causes are you involved with?

A: We’re passionate about fair trade – while organic certification addresses the environmental side of farming and production, it does not touch the social side. Migrant workers in California don’t get any better wages or working conditions in organic fields, although it’s great they’re not being doused with pesticides. We also are active in reforming drug policy in this country, to take a more humane rational approach, such as re-commercializing industrial hemp and legalizing medical marijuana for patients. Those who are addicted and abuse drugs should get treatment; we should not be destroying otherwise productive nonviolent citizens and their families with jail time and records. And we’ve recently opened up an animal rights front, fighting with allies for animal husbandry regulation to stop meat and dairy products from being produced under such poor conditions.

Q: What would you say to others who are hoping to start and lead a movement around positive change?

A: Go for it. Be ready to make a lot of mistakes and learn by doing. And any leader is only really as good as his or her team – so surround yourself with people who complement your skills and who have your back.

Q: Would you recommend any good resources for others hoping to learn more about GMOs?

A: Just Label It is a fantastic resource for updates and how to engage and help at the national level, as well as finding your local state effort and battles and plugging in. GMO Inside is also doing excellent work as well to educate folks on the issue.