A return to basics is needed!
Scroll Down

Brazilian farmers are asking Monsanto and other producers of pest-resistant corn seeds to reimburse them for money spent on additional pesticides when the bugs killed the crops instead of dying themselves.

The so-called BT corn seeds are genetically modified to produce an insecticide that will kill the corn leafworm (also known as the southern grassworm). After the insect eats the corn, the toxin inside paralyzes the insect’s digestive system, forming a hole in the gut wall. This forces the bug to stop eating within a few hours, and subsequently starve to death, according to a Colorado State University fact sheet. The GMO seeds are produced by four major manufacturers: Dow Agrosciences, DuPont, Monsanto and Sygenta AG.

In Brazil, however, the farmers say that the seeds did not deliver as promised.

“The caterpillars should die if they eat the corn, but since they didn’t die this year producers had to spend on average 120 reais ($54) per hectare … at a time that corn prices are terrible,” Ricardo Tomczyk, president of Aprosoja farm lobby in Mato Grosso state, said in a statement.

The farmers, who are represented by Association of Soybean and Corn Producers of the Mato Grosso region (Aprosoja-MT) in their battle against the agricultural giants, had to spray up to three coats of additional pesticides after the scourge remained.

But Monsanto and the other seed companies are blaming the farmers, saying they warned them to plant the GMO seeds alongside conventional seeds to prevent bugs from mutating and developing resistance to the toxic Bacillus thuringiensis (Bt) protein that makes the pesticide effective.

The same mutation and resistance occurred in the US, beginning in 2009. Researchers, led by Aaron Gassmann, an entomologist at Iowa State University, found that GMO corn ‒ specifically two of the three types of Bt corn ‒ is no longer as efficient at killing the bugs. The resistance arose quickly, due to some extent, to farmers avoiding the simple, but profit-cutting precaution of crop rotation. The scientists published their paper online in the Proceedings of the National Academy of Sciences in March.

Large-scale farming in the bug-ridden tropics has always been a challenge, Reuters reported. In Brazil, the dependence on the GMO seeds have left the agricultural industry vulnerable to pest outbreaks and increasingly reliant on the use of toxic chemicals to battle them. Tomczyk, speaking on behalf of the farmers, said that farming with conventional seeds is not a viable option for those Aprosoja-MT represents.

“There are barely any non-GMO seeds available … it is very uncomfortable that the companies are blaming the farmers,” Tomczyk said. It doesn’t help that the four agro companies didn’t give clear instructions to the farmers, he added. Aprosoja hopes to reach a negotiated agreement with the seed companies, but if all else fails farmers may sue to get reparations for pesticide costs, according to Tomczyk.

“Monsanto, et al are unlikely to accommodate the farmers,” according to an article by CommonDreams.org. Instead, their response is likely to be further seed modifications and increased use of pesticides that these companies also produce, regardless of environmental or financial impact..

Previously, 5 million Brazilian soybean farmers sued US-based Monsanto, claiming the genetic-engineering company was collecting royalties on crops it unfairly claims as its own. In 2012, the Brazilian court ruled in favor of the Brazilian farmers, saying Monsanto owes them at least US $2 billion paid since 2004. The biotech giant promised to appeal, and reached an agreement with the farmers last August to end the litigation, Reuters reported at the time.

In exchange for dropping the suit, Monsanto agreed to lower the price on a new type of genetically modified soybean ‒ not the older RR1 version the case was based on ‒ that the farmers were encouraged to purchase and plant in eight percent of Brazilian fields. Aprosoja represented the plaintiffs in that case as well.

But in October, a judge in that country blocked Monsanto’s attempt to make farmers sign restrictive agreements before being able to purchase the new RR2 Intacta soybean seeds. In December, the soybean farmers again sued the GMO company for about US $1 billion for illegally collecting royalties on the old RR1 seeds and forcing the Brazilians to sign “abusive” purchase contracts for the new ones, according to Sustainable Pulse. 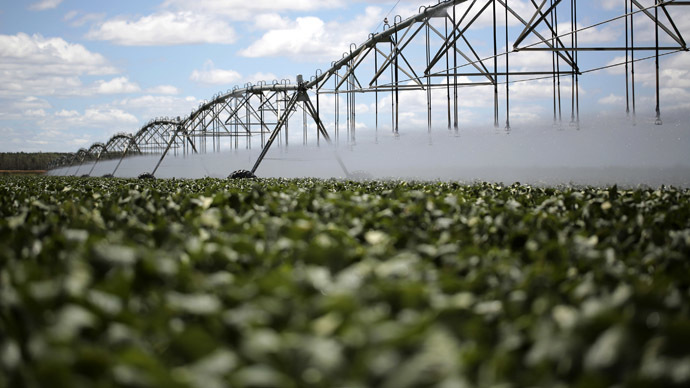